Super cool! I'm learning lots of geography rn and would love to see this turned into a full-fledged short game. Only feedback is that night is way too dark. I wish there was a way to turn it off or somehow have universal light instead of having to wait for the sun. Also a way to slow down the plane when making deliveries to smaller countries.

It will not let me get on the game from File Explorer and it keeps on saying that this app can't run on this PC and before It was saying that my computer thought it was a dangerous app, any idea's on how to fix it?

For most of the apps or games I have that would not work on my pc, I just run them as admin and they work. I do not know if this will help but I think it is worth trying.

just click more, then click run anyways. It's a common issue with new games. It will keep doing this until Windows recognizes that it has enough downloads and trusts the app.

great game. runs better than most games do on my shitty laptop. surprisingly good fun. some lag encountered when passing over dense areas at night (usa, india and japan being main offenders).

yes, you need a computer with good dedicated graphics. I have a GTX 1650 which runs he game great

Some good ideas in these early days! I had more fun than I thought I would trying to figure out where the heck I was!

Great game!Runs smoothly although for some reason if i miss the delivery the UI disappears and I can't see the city names. Anyone else?

Yep. getting the same thing. on an m1 macbook air

Same thing for me with my m1 MacBook air running Monterey 12.2 beta

There are some issues with the Linux/OpenGL build of this game.

I'm getting "This GfxDevice does not support asynchronous readback" in the console on AMD integrated graphics (open source Linux driver) and I think it's affecting some game features:

This doesn't happen with the Windows build under Wine, so I think it's to do with OpenGL. This seems relevant from my Googling: https://github.com/kidapu/AsyncGPUReadbackPlugin

Or maybe using Vulkan on Linux would help?

Hey, thanks for the reports! Have tried fixing the async readback issue, if you have some time to redownload the linux version and try it again, I'd love to hear if that's working now.

It works perfectly now, thanks!

It unfortunately insta-crashes on older macOS versions, both from the itch app and direct download

Runs smooth on my PC, but for some reason the atmosphere scattering shader's texture renders upside down: 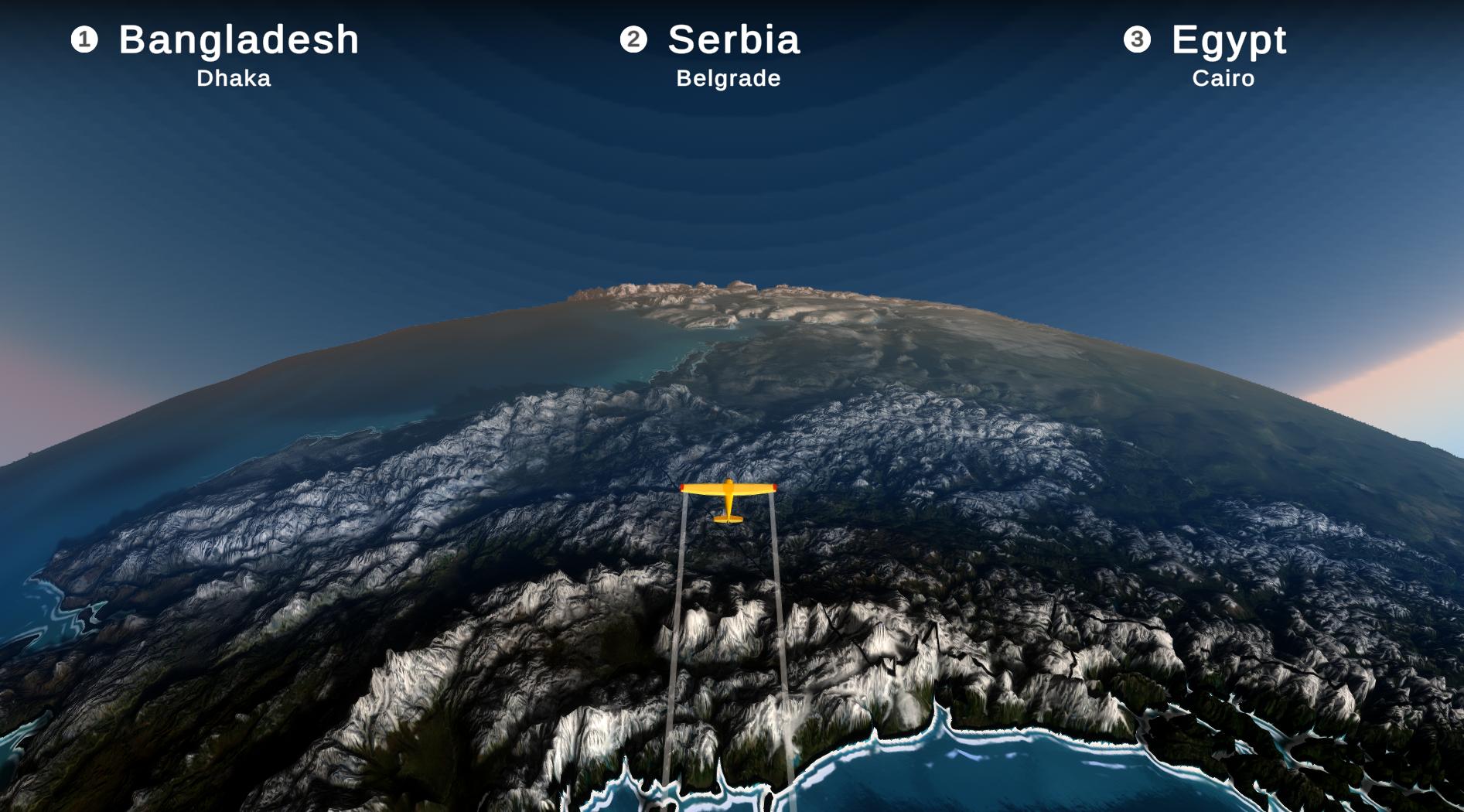 Also, no stars to be seen ;P (presumably for the same reason)

GPU is RTX 3050 Mobile, OS is Linux (this is the most likely culprit).

The Game is probably made to display more colors than your monitor can.. (try look up 16 and 32 bit colors)

Hey, I've tried to fix the upside down atmosphere. If you have time to download and try the linux version again, I would love to hear back if it's working now.

Hey, Sorry for the belated response (I don't check my itch.io often)
I can confirm that this is now fixed, and is looking absolutely stunning. Thanks!

Edit: still no stars though apparently (https://i.imgur.com/Ab9oumW.jpg) but judging from other comments (https://itch.io/post/5369916) this may not be linked to my being on Linux.

Press space, you can see all the controls in the "about" section in the menu

really enjoyed the game. although I often find myself lost. a compass direction would be nice :)

Mate my computer has 8 gigabytes of ram an AMD Ryzen 1400 and a RX 580 and it still runs smooth... except for the heating.

Beautiful game! Cannot wait to see what it becomes.

Fabulous! Such a great content from your side. Runs smoothly on ryzen 5 3600 , 32gigs ,nvidia gtx 1660 . And for me, better to take atlas with me while playing Geographical Adventures :)

The game is very smooth, even though my computer is not really powerful and it's beautiful to watch (everything is perfectly rendered). Very good game, but I'd like to be able to change the settings a bit more (for example to disable the shaders for people on really bad computers).

it runs almost good on my gpu but with a small oc of +350mhz on the core clock and +250mhz on the memory clock it runs perfectly. nice little game you got. its realy cool to see actual mapped data.

Had no trouble whatsoever. The game runs very smoothly.

Thanks to Mark in the comments below for the permission change command to allow mac OS to run it.

how do i deliver tho

Hello Sebastian; and thanks for sharing your project!

I only had one slight glitch; the atmosphere seems to flickered once or twice, within a half an hour session or so. It didn't appear frequently, only a couple of times.

As for the gameplay, I see this game as a nice educational tool. I also join DeemanInSpace; it is quite easy to get lost while flying blindly, especially when it is night time. Switching between overhead & chase cameras sometimes cause the player to lose orientation, as the overhead camera tends to end up on a weird angle - not following any cardinal direction or anything.

A compass would've helped a lot for directions. For example, a simple compass ring around our craft should both help us navigate, and keep our eyes on the craft. For chase cam, you can either show the heading slightly ahead of the craft, or even behind it... Latter is similar to how SCUBA dive compasses work: 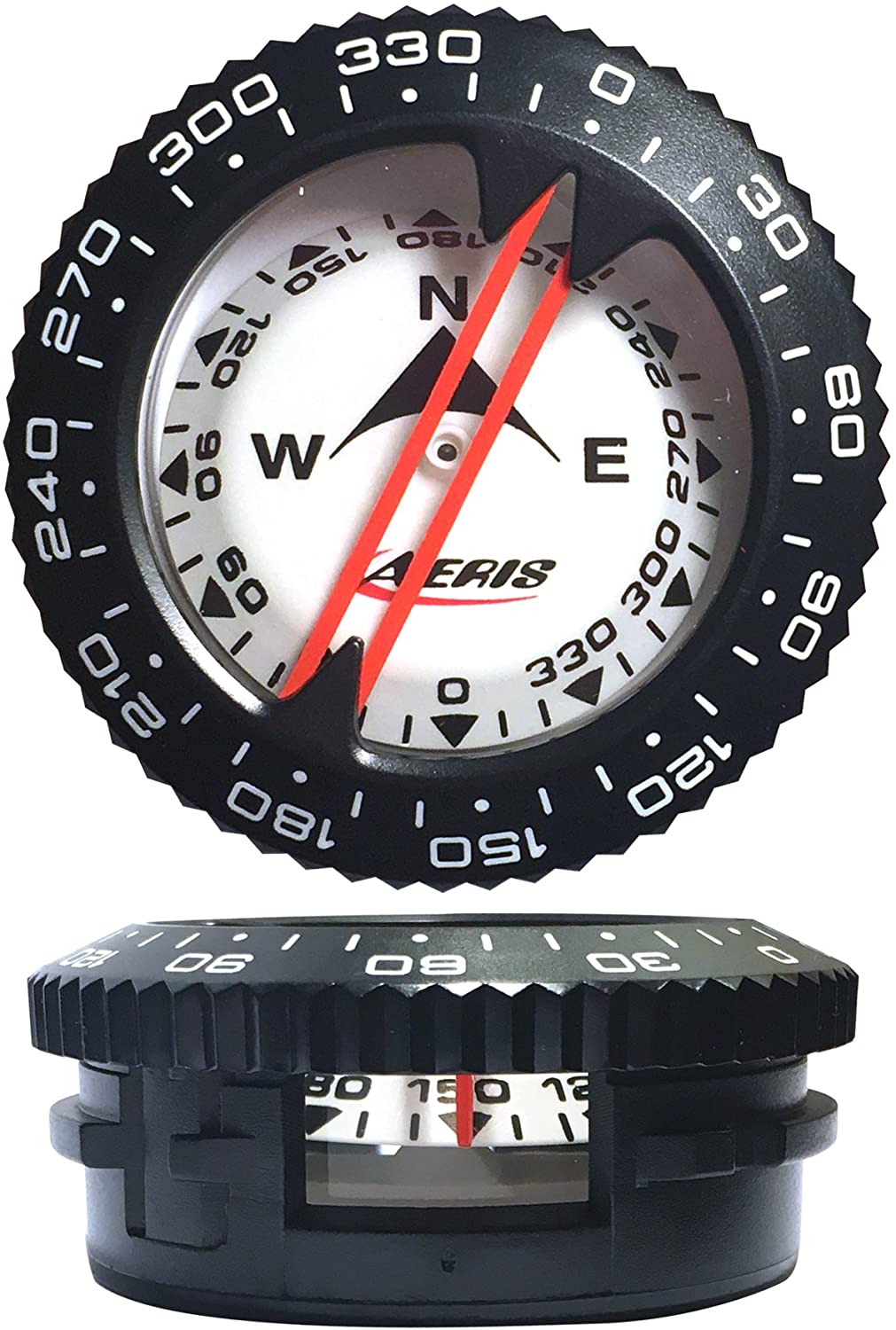 The bottom picture shows the side window, where the diver can simply hold the compass towards the intended heading, and easily check the compass while swimming.

Another helper might be having the overhead camera always orient itself in such a way, that its topside is facing north, like an actual map...

Note that both solutions will create a new problem at the poles, where the compass/camera will swing around very rapidly... It isn't a problem for the compass, but the camera might need its rotation speed can be adjusted to make it less nauseating.

The city locations might've hinted better... One can get a hint at the night time, but the aforementioned disorientation is also effective at night.

Thanks again for sharing! I love watching your coding adventures, and it is nice to have a taste of it after all :D

For those on macOS getting the "The application 'Geographical Adventures' can’t be opened." error, run the following command in Terminal:

Also, you will need to explicitly allow the app to run in "Security & Privacy" settings.

And, to do the second part: right click on the app and select open

i don't think a phone is strong enough to run something like this. i mean idk the system requirements but i'm pretty sure it's more than my pc's specs. so no. it will probably not be on phone

It is frustrating to see that the package didnt land where you wanted it to, because the plane controls are annoying (why can I not slow down? I can speed up, but why not slow down??) and then get told that you did a "disastrous delivery".

Just press 'Q' to get a bird's eye view, and when you pass over the place, press space to deliver the package, it isn't really affected by momentum and wind

That is really a nice idea, I think my son, when he was a little younger would have loved it.

The Orientation sometimes is a little hard, so it would be nice to have at least a compass. And I am sure that most of the people (also me) can´t make out, where exact the cities in the countries are. So it would be a goal, to Detail the Main cities a bit and to name them, and also the countries.
The next step would be to land at an airport of such a city. Also to make the flight less fast, I mean adjustable.

And you have to add a sound, motor, wind, and how about the weather and influence on the airplane ?

You see I am fascinated by your work! Go ahead, I love this a tiny little world...

How do i drop the Packages?

I'm always impressed by your work, and this one is no exception.
The map looks really good!  So relaxing to travel around the globe...
Well done!

True work of beauty and piece of art.

On linux sky is not working properly with stars and i could'nt deliver any package, but is still a great experience, i love your content and i wish i could do 50% of what you do.

Much love from Brazil <3

It seems to be because of no AsyncGPUReadBack in OpenGL, try the Windows build in Wine

Thank you, should be fixed in the linux build now if you download it again

Thank you, should be fixed now!

Whoa it's even better in person.

Also, for any mac users, extract with the Unarchiver and not the default utility.

THANK YOU! I was getting tired of searching, this should be in the description, as a big warning ahaha thank you!

Love your videos! Hyped to finally play it :D