A downloadable game for Windows, macOS, and Linux

My attempt at creating a chess program. It's not terribly good at the moment, but it will happily gobble up your pieces if you're not vigilant! I hope to improve it in the future.

The source code can be found here.

Video about the development here.

OK it beats me it's either good or I am bad

And I rage quitted

I found a big glitch.. 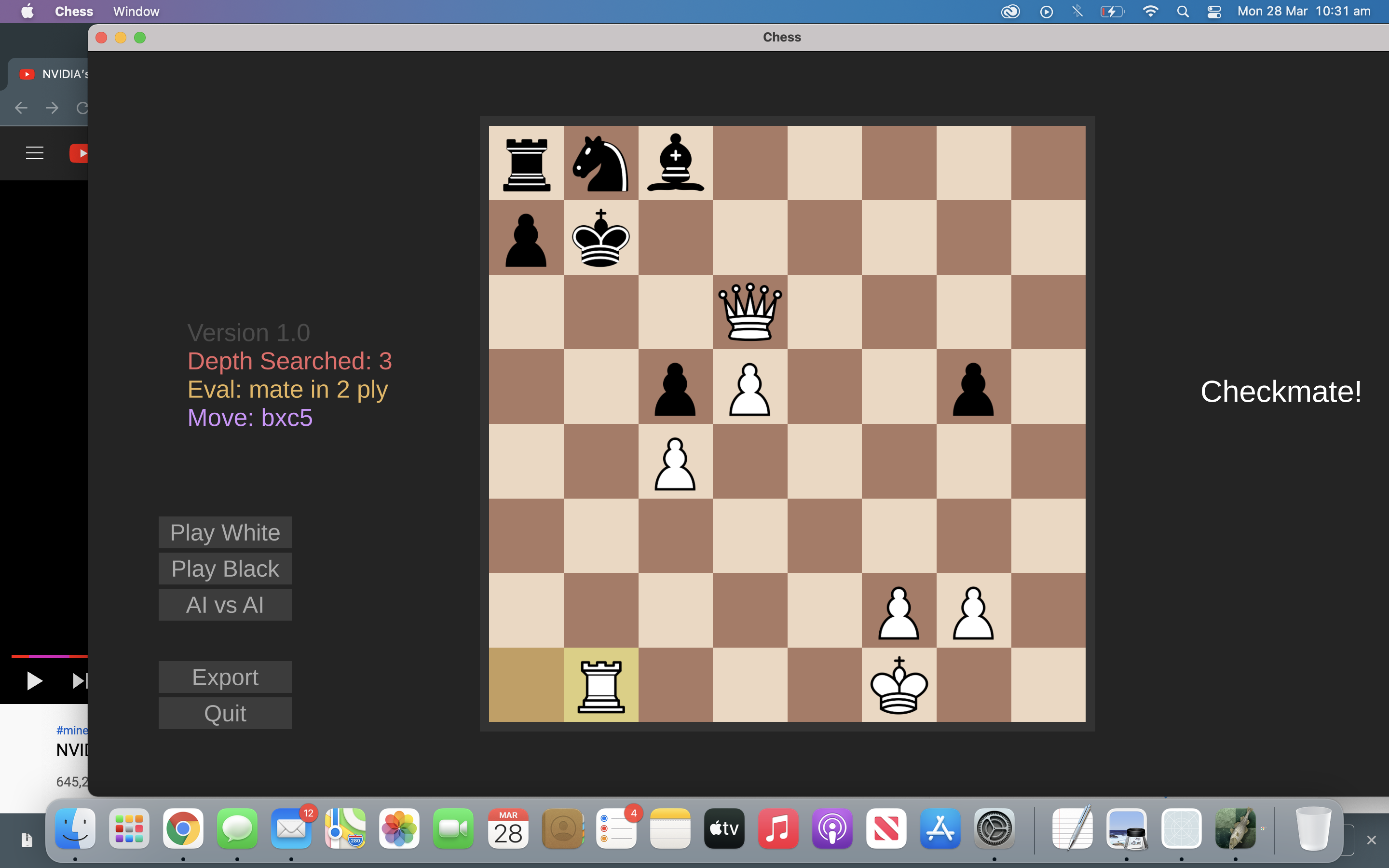 This is the game:

Stockfish had just sacked its knight for the b6 pawn but the ai thought it was still there!?

Was it a transposition error?

maybe one of the duplicates of zobrist hashing (see video

Reply
Nick Will214 days ago

I don't know if I'm just blind, but I don't see a problem

I dont see the error, it doesnt think bxc5 is a move, he show what it moved before..

Started getting interested in chess after watching your vid, gonna get this to practice :)

Great chess program! Would you mind doing two things for it? A windowed mode, and board inversion so you can play white bottom or top? Alpha-numeric on the side and bottom would be a nice touch also (well, three things).

Great engine! I played it a few times, and I lost more games than I care to admit. My ego was a little hurt :p . At least when playing, so to speak typical openings.  It feels like it has an opening book. If I didn't know better, (I assume it doesn't).

However, if I play anti-engine chess. Like the Hippo ( absolute garbage opening btw ) I literally feel like I could do anything and win. For example in one of the games. I blundered a rook and its eval was +4. I Still manage to win. It just pushes all its king side pawns and gets mated.

Another weird thing happen (its hard to explain), His queen was on h5 and then he would play Qf5, then I would play Nh4 attacking the queen. He would then  move it to g5. I would move my knight back to f3 attacking the queen. Then it would just play Qh5 again. giving me a tempi. It did this until I "allowed" it to smother mate me in 1 hehe.

I only played 20 games or so, but in some aspects it feels like a GM and in others like a 1200.  Oh one more thing, it evaluated a drawn rook endgame as +1 up until it was a draw. Even the turn before the 50-move rule kicked in. I assume its not aware of the rule ( the algorithm playing).

There is a file called opening book in the source code.

Hi thank you and beautifully work how much will you charge me to the same in javawfor checkers game?

The AI seems to be able to play well in some positions, but doesn't fair well against gambits and sacrifices due to overvaluing material.

AI time limit problem could be solved by making it increment as the game goes. It could take longer in worse positions.

It's quite challenging! I managed to get it eventually using the fried liver attack (transposed from Petroff):

Fell for the Blackburne Shilling gambit:

It took me an hour to beat the AI. The AI is difficult imo.

I lost every game lol. Pretty strong AI for beginners.

Very impressive, cool to see someone use Unity to make the classic chess AI problem!

I am the first one here? 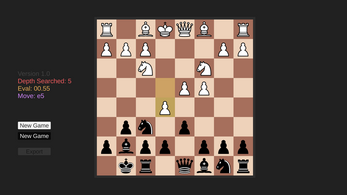