upgraded it to a 2 bit memory chip! with both 2 bits of addressing and 2 bits of data at each! 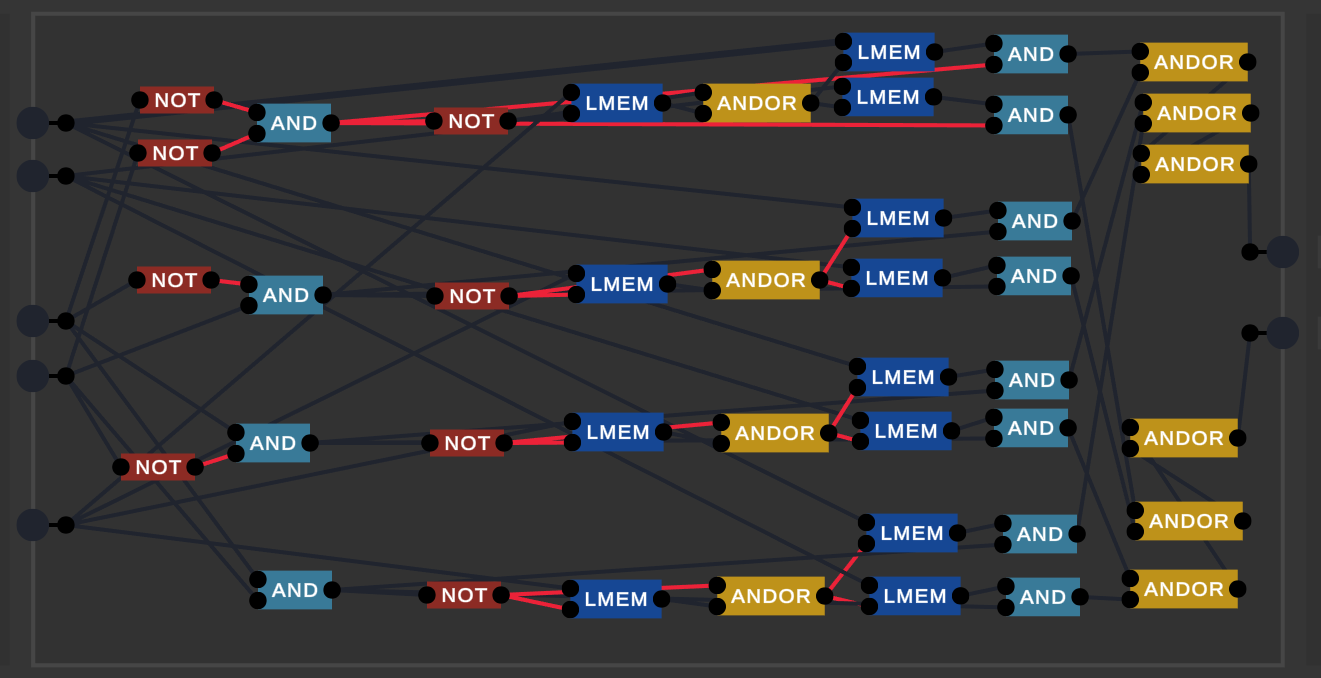 THAT'S NEAT! THANK YOU AND CONGRATULATIONS!!

in DLS2(also on itch) you can delete chip, projects and edit chips

How Do You Play :P

look at his video: 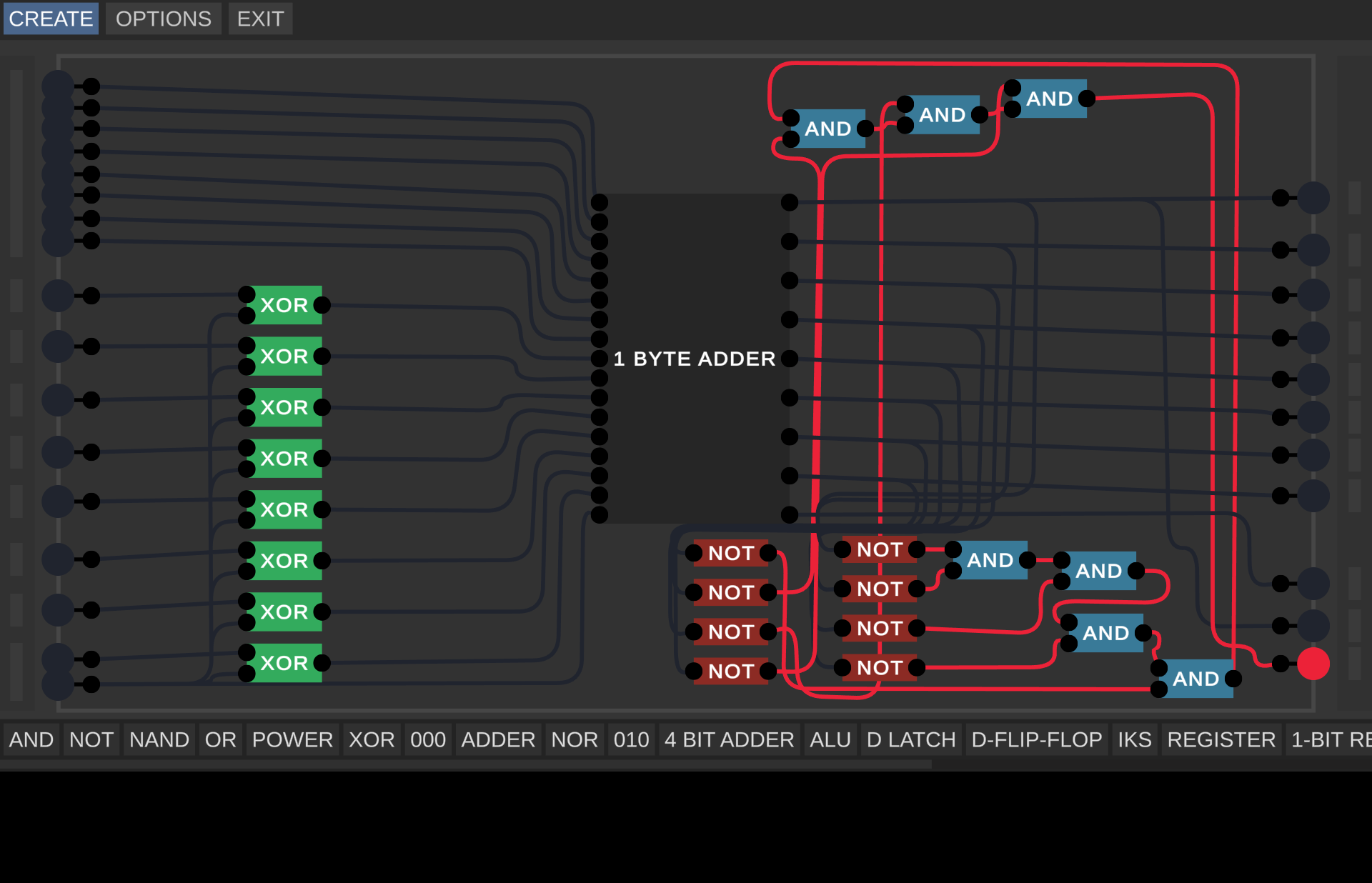 Not me downloading this on a whim and then spending 4 hours trying to build an ALU. Watched the videos, love this thing! I'll be wasting so much time with it!

Hey just saying, this project has been copied to softonic. Don't download from them, please.

how do you delete a saved chip (one of the items on bottom bar [windows 11])?

In the original project you can't delete it, but in Digital Logic Sim 2 you can delete and other cool stuff  https://banderacat.itch.io/digital-logic-sim2

how do you get the wire on/off animations?

Where's the project file used in the video?

NAND as other gates.

How do i merge the inpututs and outputs so it displays a number they indicate?

Hi there, I and some great people added new things to this game. So what we added:

I am confident that you will like it. GAME LINK

Also, you can help us by recording tutorials or videos about Digital Logic Sim2 on youtube or other social media

Can you make the chips flip causes my 4-byte Register doesn't fit.

We want to add bigger workspace in 1.6

How can i make a BCD to 7 segment display decoder?

please add it for android 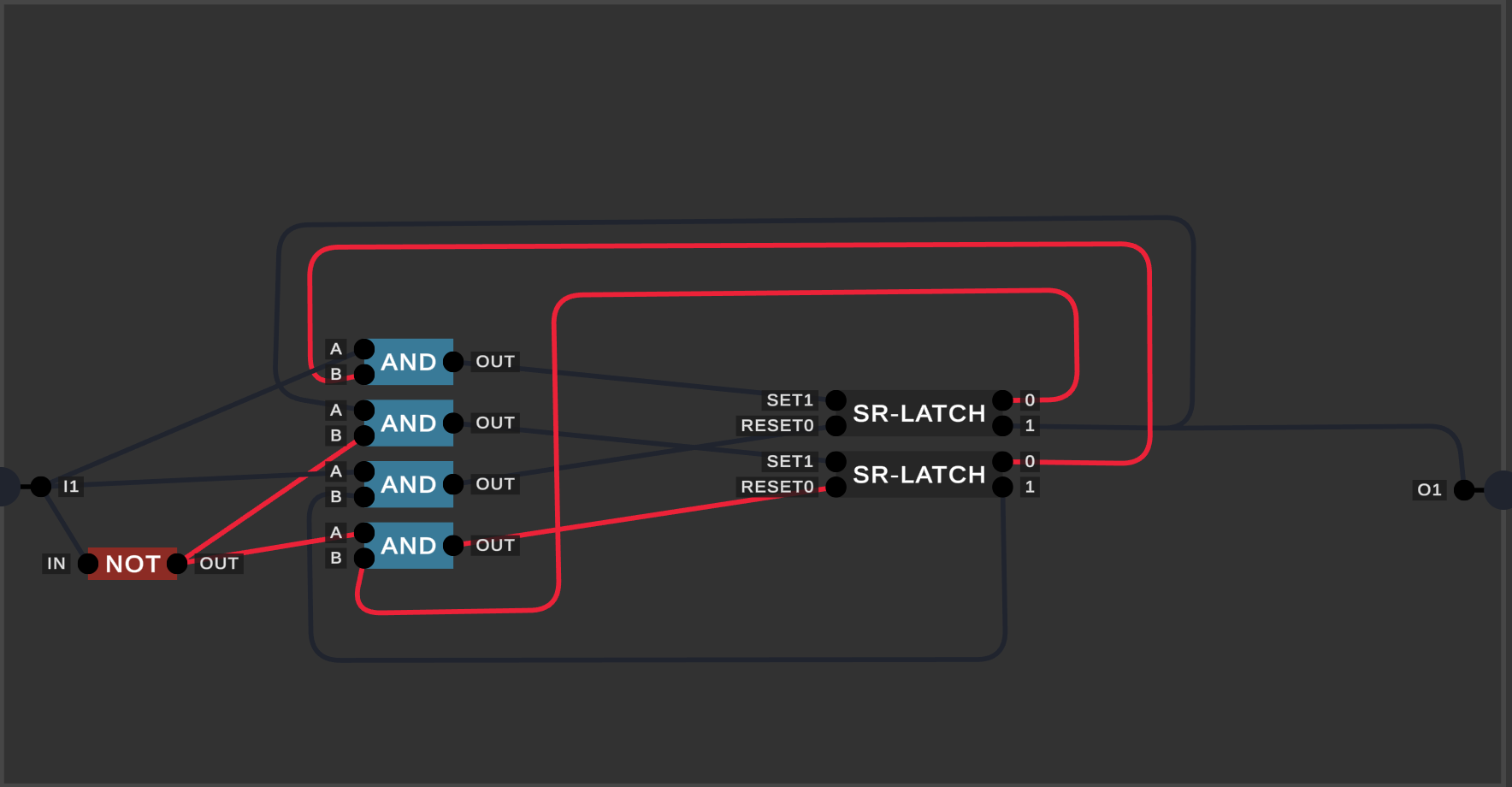 I have recently started plaing this game, but for some reason my flip-flop stops working after turing it into a chip, anyone care to explain why?

Well, i found out that my NAND gates were in fact, NOR gates and the SR-latches had a NULL state too

i play this a lot to strengthen my skill of engineering and coding. thank you very much for this!

This has to be the best thing ever! Thank you so much for making this awesome little simulator! I have always been curious about circuitry and electronics at their basic level, and playing with this has been very exciting for me. I wish it started out with only the basic on/off switch, such as you demonstrated with paperclips, so that way you can make even the and/not chips from scratch. I made an 8-bit ALU after watching your first video. Would that be useful IRL? Or would you actually just stack up smaller ALUs to get more bits? Anyway, you know what you have to do next, right?

A.) You have to add zooming and panning in the layout area and adjustable fixed position of the input/output bars so the user can have all the space they need to make infinitely complex chip boards, and you have to add a series of objectives and challenges, to get a clueless player like myself to start thinking productively about the possibilities and what needs to be done to make great things happen.

B.) You should make a new survival-crafting RPG in which the player survives by crafting chips and circuit boards. Make it an intricate, nice-looking 3D game in which the player has to plan out the logic of their circuits, create the plastic board to assemble it on, and then manually place the chips and wires how they need to be. Maybe the character is a robot with a dead human friend, and it is trying to repair the human by replacing their brain with a computer. The robot assumes it doesn't work because the circuits simply aren't adequate to reactivate the human's body so it keeps making the circuits infinitely better. Wouldn't that be a fun game? That'd be an awesome game!

Ooooooh and I only just now noticed the 'digital logic sim 2' post. Never mind everything I said, I have to go play that one.

Boom, finally I and some great people added new things to this game. So what we added:

I am confident that you will like it. GAME LINK

Also, you can help us by recording tutorials or videos about Digital Logic Sim2 on youtube or other social media

Could you add a mobile version of this?

I'll try to do

Are you planning to add a mobile version yet?

Can you add a reversed and gate? Like you have one input and the gate makes form one input two inputs.

Gate with one input and two outputs.  You turn on the input and both outputs will turn on.

I built a storage that can save 4 4bit numbers. Let me know what you think.

I have a memory that can store 4 bytes.

that was so hard to do but how does yours work?

Great news! But why not just update this Game?

Because they aren't the original creator. They can't alter this page.

Hi, nice simulator. Could you please add the functionality to go back to created chips and edit them again? I found myself in a place where I created a broken logic XOR gate and had to create a new project to get rid of the broken XOR.

Extract it and open the folder then press the one with the icon. if you see a blue screen press  (show more) then press run anyway

No need to thank me

i canot open the file

Hey guys, I make an update for this game(There are deleting chip confirmation and longer chip names).

Why doesn't your fork on GH correspond to the original repository?
It's pretty much impossible to get your changes merged into the original project now.

Because on the original project no one merges it. Sebastian just types that he will merge later and nothing do for monthes

Hi, I would need to save a project in a way, that restores the main layer and all my created chips. If I load a saved project, only the created chips show up in the status line and not the wiring of the main layer. How can I save and represent all the work?

i challenge you to remake this on scratch

Hey guys, I make an update for this game(Now there are a lot. You can zoom in and out, Delete projects and Delete chips). I leave a GitHub link where you can update and commit after that I will add an update to the page

pls update the game. pls add larger board. and how to delete saved project?

Hey guys, I make an update for this game(Now there is 7 Segment Display and You can delete the chip in the bottom bar by hovering on it and pressing DEL). Also, I am a starter and I didn't make all your wishes, but I leave a GitHub link where you can update and commit after that I will add an update to the page

Looks great! I'd love to be able to go back and have a look at the architecture of chips I have made in the past, if that is at all possible.

Oh, I am the only starter, but I leave my source on GitHub. You can modify it and fork.

oh man, I wish I knew how, or had time available to learn how. Thanks for the work that you do!

Hi, I am looking up for the team to update this game. I have already added 7 Segment Display

So I want to make an update to this game. And will be great if someone helps me. Can be starters and profs.

I would like to help you update this game. I really like this logic sim but there are some Issues with it.

Thank you so much, I left a my GitHub in description so you can fork it